Life with the Chiweenie​

This appeared on the dog-photography website of my husband, Bob, shortly after we acquired a second canine. 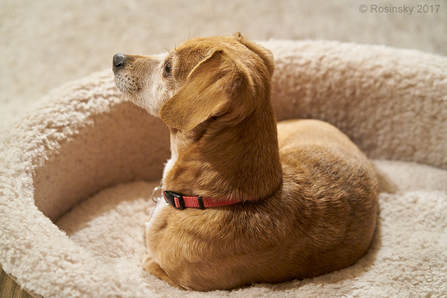 My husband has a thing for dachshunds. There’s something about their personality—their confidence, their swagger—that he just loves. Not to mention the Cuteness Factor, which is substantial.

So after decades of admiring and photographing the breed, Bob decided he simply had to have a doxie. I consented, as I’ve always recognized that dogs are good for my husband’s mental health. Even though we already had our 40-pound mutt Jazz, Bob had a dearth of dachshunds.

So the search began.

We contacted a number of dachshund rescue leagues, filled out long forms, and participated in interviews. We had to prove ourselves worthy.

I think it was during my conversation with a south Florida rescue league that I began to have second thoughts about adopting a full-blooded dachshund. There was much talk about the potential need for expensive back surgery with this breed. Did we have several thousand dollars on hand? And would we be willing to spend it on our yet-to-be-adopted pet?

Hmmm. Maybe we’d be better off with a dachshund-ISH dog, with a little bit of gene heterogeneity.

​This line of reasoning is what led us to our three-year-old chiweenie—half dachshund, half chihuahua—whom we ended up dubbing “Little Guy.” And this is where our lives were changed.

How to describe our chiweenie? I think it can be summed up in a few words:

​Would Bob adopt this dog again if he’d known what he was getting into? It depends on when you ask. If Bob’s in the front yard, begging Little Guy to go potty? Probably not. But when Little Guy is curled up cozily and snoring on Bob’s lap? Then, I think Bob would admit he’s grateful that this eleven-pound canine character marched his way into our lives.
​